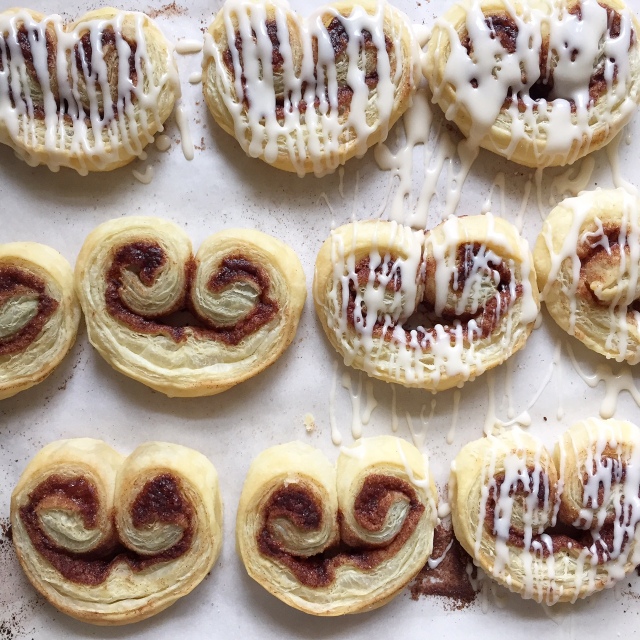 ah what loveliness can happen when you get distracted.
the other day i was supposed to be making a healthy, well-rounded meal for my good friend who just had a baby, but i was a bit distracted by cinnamon and sugar. palmiers had been on my mind for quite sometime and i was itching to play with an idea.

about a month ago, while nursing a sick little one on the couch, we were watching the barefoot contessa make these savory palmiers, which had goat cheese, pesto, and pine nuts in them. (SWOON) i jotted down a note to make them asap, but then i began to play with the palmier in my head… what if i made them sweet instead of savory? (i know this has actually been done before and i am not the first to come up with this genius idea, but up until recently i had not made a palmier… but ooohhhoo i have eaten my share though!) and what could i do with them?…

i finally got the chance to test out these palmiers i had been dreaming about and come up with a recipe for them. they were barely out of the oven before i was drooling and googly-eyed and talking to them and telling them how pretty they were. then the icing happened…

let’s just say there weren’t many left to take to my friend.

[frozen puff pastry generally comes in a box with 2 sheets – if you want to defrost & use the whole box, just simply double this recipe. *ALSO make sure you follow the box’s instructions to thaw the pastry.]

2. on a clean work surface or a large cutting board, unfold and lay out the thawed puff pastry. gently spread the softened butter evenly over the entire pastry. in a small bowl, whisk together the sugar and cinnamon to combine, then sprinkle evenly over buttered pastry. use your fingers to spread out and press in just a tiny bit.

3. starting with the left side of the pastry, fold over 1/4 of the sheet. next fold over 1/4 of the right side. repeat, so that the left and right side are now just touching in the center. now, fold the left side over the right side, forming a roll. using a sharp knife, cut the roll into slices – you should get 12 slices out of one rolled pastry. lay flat on prepared baking sheet at least 2 inches apart (they will spread). bake for about 15 minutes, until the edges of each palmier are just beginning to golden. remove from oven and let cool 5-10 minutes.

4. while the palmiers are cooling, make the icing: combine all icing ingredients and stir with a small spatula to combine. add a little milk if the mixture is too thick. it should not be too runny – you want to be able to easily drizzle it. (use icing pretty soon after you make it. the top will harden up after a bit and you won’t get that perfect consistency for long.)

One reply to “cinnamon roll palmiers”

one cannot think well, love well, sleep well if one has not dined well. - virginia woolf

i’m not a huge proponent of ripping people off on the internet, so i will give credit where credit is due. unless otherwise noted, pictures & recipes are mine.